by Philip | Last Updated: December 8, 2016 When you buy something using the links on our posts, we may earn a small commission at no additional cost to you. Learn more.

Is a Vichy Shower for you? Read this article to find out what a Vichy shower is, its quaint origins, its benefits, and why you should experience it yourself.

What is a Vichy Shower? 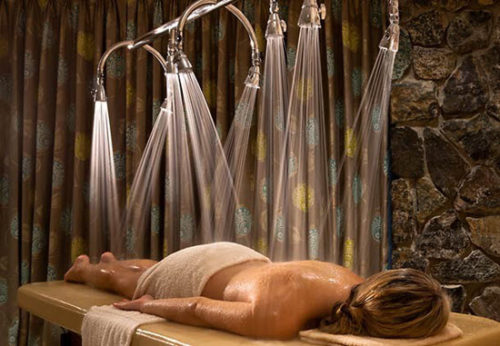 A Vichy Shower is a unique way of rinsing off. When we shower in the bathtub, we’re usually upright and we let the water run from our head and down our body.

The effect is that the water cascades over your entire body — a wonderful and relaxing experience (as you can imagine). The water drains away either from channels on the table or from drains on a tiled floor.

For a 10-minute Vichy Shower, you’ll have at least 100 gallons of water pouring over you. Intense, and intensely soothing.

Many spas and services offer ‘table showers’ and many a troubled spouse Googles the term only to find the Urban Dictionary definition! In 99% of cases there’s nothing to worry about – a table shower massage is just another name for the Vichy.

The History of Vichy Showers

Vichy Showers have very interesting origins. They are named after a town in Central France.

The story goes that during his famous conquest of ancient Gaul (France), Julius Caesar discovered the therapeutic waters of the springs when his horses drank the Vichy waters. These hard-ridden, exhausted beasts immediately recovered from their fatigue. The Romans saw the potential of the thermal “Vichy” springs and constructed spas in the area.

By the 16th century, the mineral baths had acquired a reputation for healing and curing among the European aristocracy. The Vichy waters were said to cure and relieve different health problems including paralysis, gout, rheumatism, arthritis, skin diseases, digestive complaints, and more. 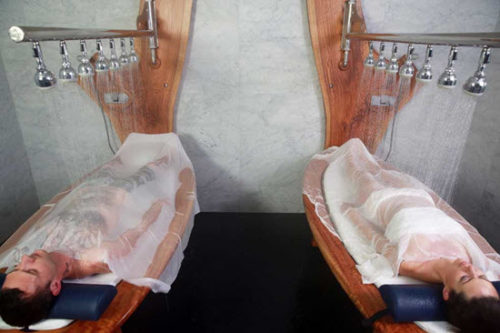 As we mentioned earlier, there are two ways that you can experience a Vichy Shower.

As a standalone therapeutic service

Did you know that water can be used to treat diseases? Water therapy has been around for thousands of years – as far back as the times of the ancient Greeks and Romans. Hydrotherapy is a big part of a traditional system of medicine.

Vichy Showers make use of both temperature and pressure. A therapist usually starts off with a 3-minute warm shower. Then the jets and water are adjusted for hot and cold water therapy.

Apart from temperature, the water’s pressure can also be adjusted by the therapist so that you either get a rejuvenating soft sprinkling of water or a more solid pummelling for better circulation.

As part of a total spa experience

Spas offer different packages that include luxurious services like seaweed and mud wraps, or sea salt and essential oil scrubs. Then you are rinsed off in a Vichy Shower and then it’s finished off with a massage and an application of moisturizing body lotion.

As you can see, Vichy Showers have real benefits to the body. Let’s line them up:

Check out this very short feature on Vichy Shower treatments.

You Should Try Vichy Showers If…

To sum up, you should take the plunge and go try a Vichy shower if you want a new relaxing spa experience. As you heard in the video, it takes awhile before you would need another session so the effects are quite long-lasting.

Personally though, we’d spring for the Vichy Showers for the health benefits. We have a self-professed weakness for three things: pizza, wine, and the couch; fantastically decadent things that aren’t really ideal for the body’s health and circulation.

If you have something ailing you like acne, digestive problems, sleeplessness, anxiety or depression, arthritis, and whatever we’ve mentioned above, a Vichy Shower session is a relaxing and therapeutic solution that might just work better than a bottle of medication.

A writer and teacher who enjoys lazing around and building winter nests out of duvets. “Most are too itchy. You’ve got to be picky.” His goal is to create a complete home spa for 24/7 access to rest and relaxation. Next on the agenda: a barrel sauna for the garden. Connect with Philip on Twitter @completehomespa.